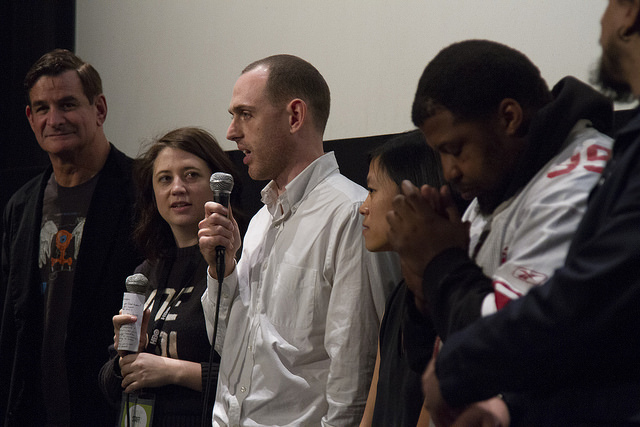 Saturday night’s sold out screening of The Lost Arcade proved something of a homecoming for a lost tribe -Manhattan’s diehard arcade video gamers. For the last two decades the film’s subject, the “lost arcade” known as Chinatown Fair, provided the last refuge and a sense of place for NYC’s coin operated game players, until its closing four years ago. As literally the last bastion of a once thriving industry, the arcade attracted an array of colorful characters, whose appearance on screen and in person Saturday night drew reactions more common to a hip-hop or rock concert than to a documentary screening. This raucous homecoming atmosphere reflected the spirit of reunion for this now fractured community, that The Lost Arcade bitter-sweetly provides a filmed epitaph for.

Director Kurt Vincent and producer Irene Chin apparently stumbled upon Chinatown Fair late one night simply by walking down Mott street after a late meal in the neighborhood. Attracted to the palpable energy of the arcade, the filmmakers inquired further and ultimately met and befriended several of the arcade’s employees and regular patrons. Upon learning of its imminent demise in 2010, they launched into action, with a crowd funding campaign and a growing network of related contacts to chronicle the history and community they found at this veritable Manhattan institution. Though the film touches upon the early years of the arcade before the digital era, followed by a survey of its place during the “Golden Age” of video arcades in the 1980’s, The Lost Arcade focuses primarily on the recent past when Chinatown Fair stood alone as the last arcade entirely dedicated to video games in New York. As detailed in the film’s voice over “No food, no prizes, no distractions – just video games!”

Finding the last of a dying breed, director Vincent realized “When [we learned] it was closing when knew we had a story to tell-and we had to capture it soon!” By interviewing one subject after another, they gathered enough new and found footage to honor both the arcade’s glory and final days, but in an unexpected twist, Chinatown Fair reopened under new management earlier this year. However, the Chinatown Fair of 2015 offers a drastically different atmosphere than in its previous incarnation, much to the consternation of the film’s principle subjects and in the assembled crowd at the screening. The contrast between the arcade’s former employees, nearly all dedicated male fighting gamers who hope to resurrect their communal spirit with a new Brooklyn venture Next Level, and Chinatown Fair’s new generation of mixed gender rhythm and dance game players provides The Lost Arcade with a powerful if unexpected third act. After the film, the new owner proudly announced “We have eight great new machines, but sorry no fighting games!” The audience responded with predictable dismay.

While the film focuses on a small population within a sub-genre of a subculture, the excitement of The Lost Arcade‘s audience provided one of the festival’s most energized atmospheres. Filmed just a subway ride from the theater, this was a film for the home team, starring the place that brought them together, and celebrating their unique, if imperiled community.

Eugene Rosenberg is a writer based in Uptown Manhattan who has taught English and performance at several institutions in New York City, and spent a decade consulting and publishing in Asia. His writing can be found at https://palmhandstories.wordpress.com/