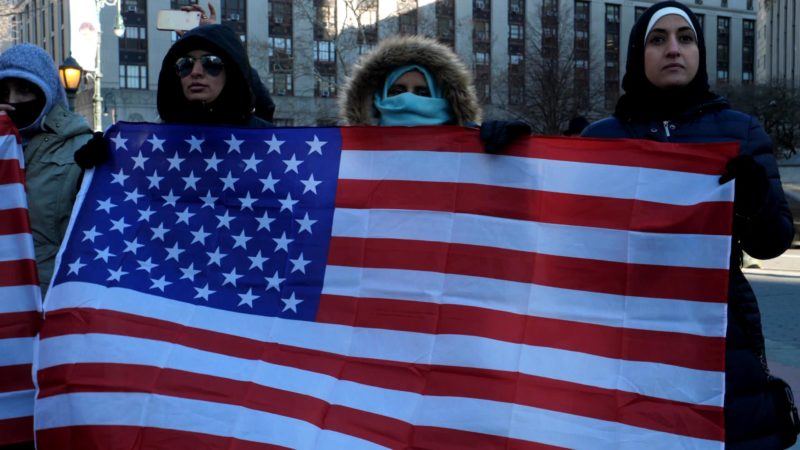 DOC NYC announced the lineup of 42 work-in-progress documentaries chosen from submissions to participate in the “Only in New York” roundtable meetings with industry professionals and mentors. Over the course of four days (Nov. 12-15), the filmmakers will network with financiers, producers, sales agents, distributors, festival programmers and other mentors at the DOC NYC PRO conference that runs concurrently with the festival.

Only in New York is co-presented by SHOWTIME® Documentary Films for the second year.

“We call these meetings ‘Only in New York’ because of this city’s unique concentration of decision makers,” said DOC NYC PRO producer Eric Johnson. “We’re excited by the artistic and commercial potential of these projects and want to help make the connections that allow them to realize their full potential.”

American Dreams follows a displaced factory worker in Ohio, a Kansas farmer facing foreclosure, and a laid off mortgage processor turned Uber driver in Florida — providing an immersive view of middle class families on the brink.

American Muslim follows five diverse Muslim Americans in New York City as they navigate a changing world since the 2016 election. The film chronicles the Muslim Ban and pushback against it, while creating intimate portraits of five distinct lives.

When her mother and sister battle chronic pain and become severely addicted to prescription opioids, director Jamie Boyle begins a sweeping examination of America’s largest drug epidemic and her family’s journey into it.

Trump’s America: In a historic first, a Palestinian American runs for New York City Council declaring that the Arab community can be silent no more.

Can You Bring It: Bill T. Jones and D-Man in the Waters

Can You Bring It traces the remarkable story of how a celebrated work of art from the age of AIDS revitalized two disparate communities, 30 years apart, both struggling to make sense of the plagues of their generations.

A seafaring tale about an anarchist theatre company attempting to disrupt the capitalist system. When their 90 foot tall-ship is pursued by border officials, what begins as an offbeat road film becomes an epic story of community, performance, and love.

This vérité film follows a serial of conflicts and compromises between the urban management officers and an aging fruit vendor who takes advantage of public streets to do his business in Wuhan, the biggest city in Central China.

Civil War (or, Who Do We Think We Are)

When we say “we the people” who do we mean by we? Civil War explores how America remembers the Civil War and what the stories we tell reveal about who we are. A stunning portrait of contemporary society and our persistent conflicts within.

Directed by Benjamin May

Weldon Irvine Jr. faced generational depression long enough to make an indelible mark on jazz, hip hop & civil rights before succumbing to suicide in 2002. This film is narrated by Irvine himself, via 40 years of taped conversations he left behind.

The Dilemma of Desire

The Dilemma of Desire explores the clash between the external power of gender politics and the equally powerful imperative of female sexual desire. How different would the world look if women’s libidos were taken as seriously as men’s?

The End of Our War

Yurluey is a FARC rebel commander: a woman with power, fighting for 20 years from Colombia’s jungles. But after the guerrilla lay down arms in a peace deal, she becomes a nobody, and must reinvent herself to join the society she rejected.

An all-women polar expedition, with team members from across the West and the Middle East, ski across the rapidly dwindling sea ice of the Arctic Ocean in this story of faith, resilience and global citizenry.

Far From the Nile

Musicians from countries along the Nile River collaborate to shed light on Africa’s water issue: This is The Nile Project. On their 2017 U.S. tour, they struggle to work through differences and find common ground. Will the power of music transcend?

In the ultra-competitive indoor sport of elite, stunningly-designed model airplanes, a wild-card newcomer threatens to knock a teammate off his world champion throne.

On a desolate island ten miles North of Manhattan, inmates from Riker’s Island Jail bury the unclaimed and unidentified dead of New York City. Now, the families of the descendants are demanding greater access to this prison for the dead.

For the past five years, the film followed the career development and family life of Chuan Guo, the first Chinese man to take on a solo non-stop circumnavigation, who has been missing for two years, trying to understand the weight of a man’s vision.

A Brooklyn teen finds his voice through crafting hip-hop verses made exclusively of elements from the periodic table. But the greatest pressure comes from home with his mom who has high expectations for him in a science-rap competition, and in life.

Produced by Chelsi Bullard, Hima B.

Maurice Hines: Bring Them Back

A feature-length documentary about an absurdist internet persona and the search for genuine human connection.

The Moment of Truth

The untold story behind the most iconic image of the Vietnam War raises pertinent questions regarding our visual literacy and the power of images to deceive, to illuminate, and to affect the way we understand the world.

A revealing visual and narrative odyssey through the life and legacy of Bauhaus master László Moholy-Nagy, this feature documentary focuses on his time as founding director of the influential New Bauhaus school of design in 1930s and 40s Chicago.

Trans filmmaker Madsen Minax returns to his rural Michigan hometown following the mysterious death of his infant niece and the subsequent arrest of his brother-in-law as the culprit.

Not In My Mother’s House

A young, queer Muslim woman’s decision to come out after the Orlando shooting is muddled due to her religious mother’s silent disapproval.

Nothin’ No Better is a series of cinematic portraits, each one a glimpse into the life and perspective of a different member of the community of Rosedale, in the Mississippi Delta region.

An uncompromising independent Manhattan record store that was vital to NYC’s 1990s and 2000s music scene is forced to close its doors after 20 years.

The Pink Waves follows six New Jersey women and one man, Democrats, Republicans, and Greens outraged by Trump’s election, and compelled to run for office. None of them has done this before​; ​all are determined to make a difference.

Pretty Ugly – The Story of the Lunachicks

NYC’s most legendary group of punk rock heroines, Lunachicks formed as teens and grew a worldwide cult following in the 1990s, inspiring generations of women with their musical chops, Spinal Tap-like antics, and raw defiance of the sexist status quo.

A young Hasidic rabbi from Brooklyn brings his brand of evangelical Judaism to the American west. As he travels across Montana, he confronts threats to Jews from neo-Nazis, and also objections to his preachings from other rabbis in the state.

Discover the vast and strangely beautiful places where things go to die and meet the people who collect, restore, and recycle the world’s scrap.

A New York coming of age story about hope, sisterhood and belonging as the three young homeless sisters Tai, Rainn and Brooke race against all odds and circumstances towards a brighter future.

A feature documentary about the resurgence of socialism in the United States.

A woman travels from New Orleans to India seeking her grandfather’s village. In the 1890s, these Muslim men came to the U.S., marrying African American women here. Crossing divides, a granddaughter of this cultural tangle regains her lost family.

Taking Venice is a little-known Cold War heist, a game of art and politics to steal the crown of European culture at the 1964 Venice Biennale. At the heart of the film is artist Bob Rauschenberg’s journey towards political and personal awakening.

A transgender man and a trans woman in their early forties fall in love. After years of looking for a supportive environment, they finally find comfort and support in each other and are ready to start the process of gender transition.

The late Tom Wilson is an overlooked architect of modern music. A genre-jumping genius, Wilson brought us Cecil Taylor, Bob Dylan’s “Like a Rolling Stone”, The Velvet Underground, and much more. Yet why is his name not more widely known?

Up For Debate, a vibrant new doc series, steps inside the NYC Urban Debate League. Engaged middle and high school teens tackle controversial topics, preparing for both sides of arguments and learning that real debate is about listening – not winning.

Hector Vargas wants to save endangered primates in Yasuní national park, one of the world’s last high-biodiversity forests on earth, but oil extraction, recently approved by Ecuador’s government, has gotten in the way.

This is the story of Representative Barbara Lee, a steadfast voice for human rights, peace and economic justice in the U.S. Congress, who was the lone voice in opposition to the broad authorization of military force after the September 11th attacks.

A dog. A house. A spouse. A thriving small business: manufacturing sex toys that create the experience of being inseminated by extraterrestrials. This is the story of a Native American gentleman named Lone Wolf, who embodies the American Wet Dream.

Get your DOC NYC tickets and passes now!