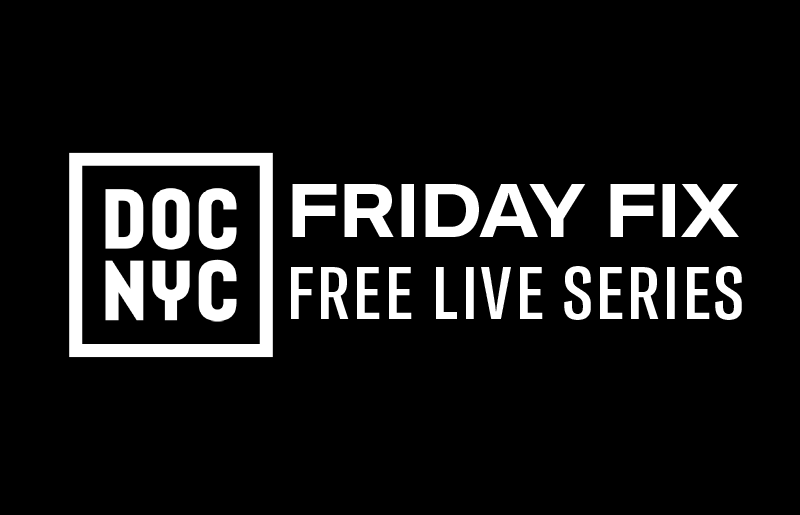 Friday Fix is a new series covering documentary film, hosted by Thom Powers. Viewers are invited to share comments during the live show. The episodes are taped and able for viewing anytime. Find links to recorded webinar content below and on our YouTube channel, in addition to a curated list of resources related to specific themes.

You can still register and view our previous webinars on New Strategies for Distribution, Film Promo & PR in Stay-at-Home Times and Cash Flow for Filmmakers by clicking on the respective names.

On Episode 11, Tom Oyer, Associate Director at the Academy of Motion Picture Arts and Sciences, joined us to discuss the body’s new rules for the 2020 Oscars in the wake of Covid-19. And filmmaker Carol Dysinger, director of Learning to Skateboard in a Warzone (If You’re a Girl), 2019 Academy Award-winner for Documentary Short, talks about her journey to Oscar gold and shares advice to short filmmakers. And Patrick Harrison, AMPAS Director of New York Programs and Membership, discussed the Academy’s recent push to diversify its ranks. Hosted by Opal H. Bennett, DOC NYC shorts programmer and the festival’s new Director of Filmmaker Development.

On Episode 9, Quibi documentary head Jihan Robinson discusses the platform’s slate of nonfiction programs. Filmmakers Grace Lee and Marjan Safinia talk about their new documentary And She Could Be Next, about women of color transforming politics, coming to PBS. Oscar-nominated director David France discusses his new HBO documentary Welcome to Chechnya about activists who work to help LGBT Chechens from persecution.

Episode 8 of Friday Fix previews highlights of the AFI Docs festival accessible online throughout the U.S. The festival will show a newly restored version of William Greaves’ classic documentary of the 1972 National Black Political Convention, Nationtime-Gary. Greaves’ legacy will be discussed by Shola Lynch who directed films about Shirley Chisholm and Angela Davis, and is a Curator at the Schomburg Center for Research in Black Culture. Oscar-nominated director Steve James (Hoop Dreams) will discuss his new series, City So Real, about Chicago’s mayoral race, playing at AFI Docs. And Miami filmmaker Dudley Alexis talks about his new film, When Liberty Burns, about the 1980 uprising over a police killing of an unarmed Black man.

On Episode 6, Oscar-winning filmmaker Fisher Stevens The Cove discusses his new film And We Go Green about Formula E racing with electric cars. Oscar-nominated filmmakers Kirby Dick and Amy Ziering The Hunting Ground discuss their film On the Record, which follows women in the hip hop world as they go public accusing Russell Simmons of rape. Firelight Media President Marcia Smith will discuss new initiatives at the Harlem-based organization that supports filmmakers of color.

On Episode 5, Marc Levin discusses his Quibi series I Promise about an Ohio grade school backed by Lebron James; and the directors of Crip Camp, Jim Lebrecht and Nicole Newnham discuss their history of the disability rights movement that won the Sundance Audience Prize and is now on Netflix. This episode of Friday Fix is co-presented by NEON Rated.

On Episode 4, Nadia Hallgren talks about her Netflix documentary Becoming about Michelle Obama. Marc Levin discusses his Quibi series I Promise about an Ohio grade school backed by Lebron James. And Nelson George reflects on interviewing our elders after his father’s death from Covid-19.

RSVP by clicking here. Friday Fix Episode 3 focuses on PBS’s Asian Americans, interviewing two executive producers of the five-part series, Renee Tajima-Pena and Jean Tsien. Plus, filmmaker Hao Wu, director of the Netflix short All in My Family discusses how he witnessed Covid-19 arrive in China, then later in the U.S. The three guests will reflect on rising expressions of racism in the U.S.