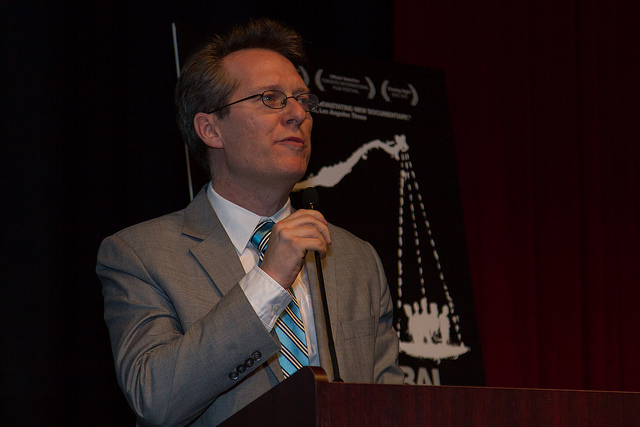 DOC NYC, New York’s premier documentary festival, closed today at the SVA Theatre with an awards presentation by the festival’s Artistic Director Thom Powers prior to the gala screening of Ken Burns, Sarah Burns and David McMahon’s The Central Park Five. Running from November 8-15 at IFC Center and SVA Theatre, the third annual festival featured 115 films and events and, despite having ticket sales halted for close to a week due to Hurricane Sandy, saw an increase of over 20% in audience attendance over last year, selling out dozens of shows.

“Thanks to the hurricane, this was our most challenging year so far, yet it also wound up being our most successful,” said Artistic Director Thom Powers. “We increased the number of films, grew our panels under the new name Doc-A-Thon, and expanded into a new neighborhood with the SVA Theatre. We were honored to welcome esteemed directors such as Alex Gibney, Barbara Kopple, Jonathan Demme and Ken Burns; and grateful to all the filmmakers and audiences who supported us in the wake of the storm’s disruption.”

Three juries selected films from each of the festival’s Viewfinders, Metropolis and Shorts programs to recognize for their outstanding achievements in form and content. Festival audiences voted for the SundanceNOW Audience Award.

Viewfinders Competition: The jury selected from among ten films in this section, chosen by the programmers for their distinct directorial visions.

Metropolis Competition: The jury selected from among seven films in this section, which showcases films that exemplify the diverse range of stories in New York City.

Jurors’ statement: “The jury has decided to award the Grand Jury Prize to a documentary that demonstrates a great level of craft and an astute directorial eye in producing a complex, heartfelt portrait of a very special individual. It’s the story of a man who’s managed to find his own unique path to the movies. A story that could only happen in New York, yet one that will move and engage anyone who sees it the world over. The jury is honored to award the Metropolis Grand Jury Prize to Radioman and its director Mary Kerr.”

Winners of the Grand Jury Prize in the Viewfinders and Metropolis competitions each received a Digital Cinema Package (DCP) provided by Technicolor-PostWorks New York.

SundanceNOW Audience Award: Features from both competitive sections were eligible for this award, based on audience balloting at the first screening of each film.

The winner of the SundanceNOW Audience Award received a selection of 50 DVDs from the IFC Films and Sundance Selects library. SundanceNOW Doc Club (sundancenow.com) offers streaming access to up to 10 new documentaries each month, chosen by DOC NYC Artistic Director Thom Powers.

Shorts Competition: All films playing in the shorts section, plus the two shorts screening in the Metropolis section, were eligible for this jury prize.

Jurors’ statement: “The jury would first like to acknowledge two powerful and intimate short films that capture the struggles of a pair of families as they battle through emotional confusion following devastating and violent tragedies. The Special Jury Prize for Documentary Short Films goes toThe Children Next Door, directed by Doug Block, and Julian, directed by Bao Nguyen. But this year’s Short Film Jury Grand Prize goes to a documentary that is tonally quite different from those two films. Despite all the recent changes to the city, New York remains a place where it is quite possible to strike up a conversation with a disabled person on the street and quickly ascertain the adventurous, culturally daring, politically charged, and subversively sensuous life they have lived—and furthermore that they have no intention of fading into the background just because a few breaks haven’t gone their way. The Short Film Jury Grand Prize goes to Riley Hooper’s playful and poignant short portrait, Flo. Riley Hooper’s charming short captures the spirit of Flo Fox and of a rough and tumble New York downtown art scene that hopefully will continue to subvert our expectations.”